THE SECRET KING OF TAORMINA 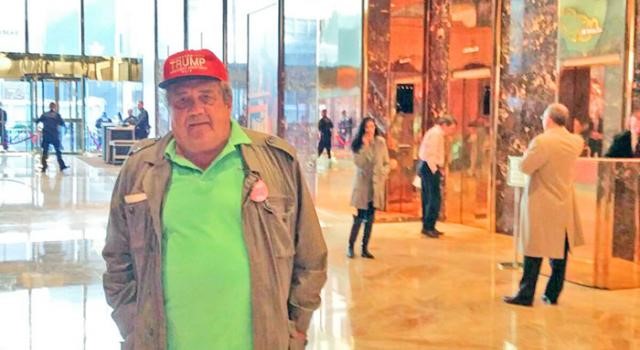 The world is small and full of things you don’t expect. But they really do happen: when Donald Trump called a G7 meeting in May 2017, he wanted it to be in Sicily. Despite the objections of the Italian police and the embarrassment of the American government, Trump wanted to go to Taormina[1] at any cost because he has had a good friend there for years. This friend is a 73-year-old man with an unkempt and perhaps not bright appearance, but with a great history and a secret behind him. In his way a King. His name is Costantino Carlo Maria Papale, but everyone in Taormina calls him Dino.

His has been one of the richest families in the splendid Sicilian city for over two hundred years, and he lives there as a kind of Emperor. In Taormina, despite the tragic death of his second wife, who was hit by a friend’s car after a party, he will never be alone: ​​he lives with his sister Maria Teresa[2], Queen of this Kingdom, in a magnificent palace. She is the president of the Taormina Art & Culture Association, which coordinates 15 art galleries and sponsors 41 local artists[3] and many international celebrities. Dino and Maria Teresa were so important to him that Trump flew to Sicily immediately after his election as President of the United States and celebrated the victory with his friends from Taormina[4].

Over two centuries of history and nobility 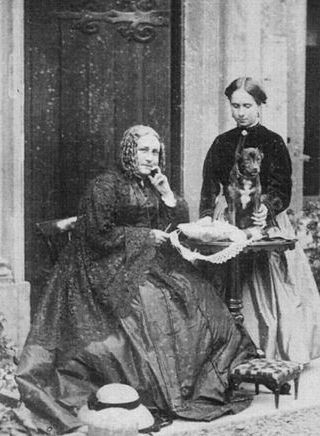 Dino is the son of a surgeon, an important man of the Messina aristocracy: Doctor Carlo Papale, Count of Paternò Castello, who was the son of the chief of the Messina Health Department immediately after the unification of Italy. The grandfather’s name was Constantine[5]. Famous relatives are the Counts of Barcelona and Aragon, the Counts of Provence and the Dukes of Altavilla[6]. The Papale family owned 48 large estates in the 16th century, had a seat in the Royal Parliament of Spain, and their tenants worked on 80,000 hectares of land – a vast estate[7] that was expropriated in 1860 on the orders of General Giuseppe Garibaldi following the annexation of Sicily to the Kingdom of Italy. For this reason, the Papale family hates Italy and has always been part of EVIS[8], the army of the MIS (Sicilian Independentist Movement)[9].

Dino’s mother, Giuseppina Acrosso, was the daughter of the Gauleiter of Taormina, one of the most powerful men of fascism, who after the war became the local leader of the Monarchist Party, but also founder of the Rotary-Club of Taormina[10] and Grand Master of the local Masonic lodge[11] – like Dino’s great-grandfather at the beginning of the 19th century, who became famous as the mayor of Taormina, who married Lady Florence Trevelyan[12]: she was the ex-lover of the English King Edward VII and a lady-in-waiting of Queen Victoria[13], who, with her dowry, contributed significantly to the family’s property[14]. With this money and the titles behind him, Dino lived a bohemian life as a boy: at 20, in 1967, he married a famous French tennis player, Evelyne Terras[15], with whom he remained married for ten years and had a daughter, Magali, who’s an established painter in Toulon[16]. His second wife, Mariella Benedetto, was a surgeon, also from an aristocratic family[17].

After the divorce from Evelyne (1977), Dino, who had spent his teenage years between Montecarlo, Paris and Turin, returned to Taormina to manage family wealth and become a landmark of the city. Since then he has been mayor or city councilor from 1984 to the present day without interruption[18], but since retiring he has been a city councilor for tourism for free[19]. He works a lot: For almost a decade he has been organizing the Goethe Literature Prize[20], one of the most important cultural events in Eastern Sicily[21], as well as dozens of other initiatives of cultural excellence, and therefore, among the jury and award-winning artists in the city, manages important intellectuals like that President of the Nobel Prize for Literature Committee, Kjell Espmark, the writer Alberto Bevilacqua, the songwriter Roberto Vecchioni[22], the singer of Simple Minds, Jim Kerr[23] and many other celebrities[24].

The connection with Russia and with Donald Trump 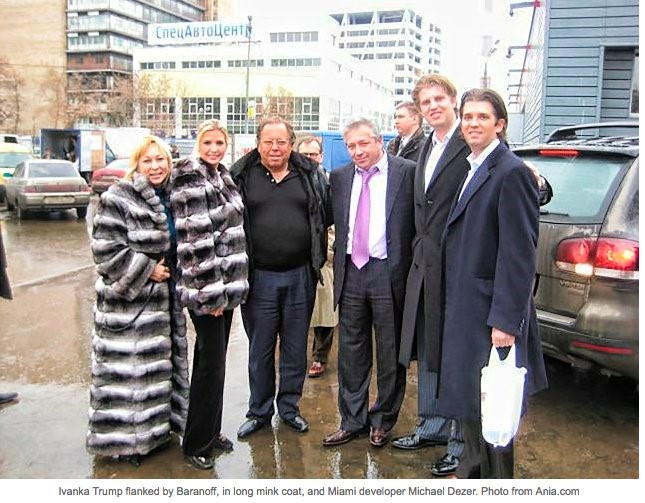 Mainly Russian writers were among the winners of the Goethe Prize[25], so that in 2013 Papale received the Medal of the Order of Peter II, which was personally presented to him by the Russian Consul General for Sicily, Vladimir Korotkov[26]. Korotkov is a former tennis player and has been friends with Dino Papale for over 50 years[27]. Since Vladimir Putin came to power, Papale has also organized a prize for Russian poets named after Anna Achamatova[28], a poet loved by the Russian president. It takes place during a summer festival that is named annually after Russia[29] and is sponsored by the Moscow government[30] and directed by a famous writer, Marina Knyazeva[31]. By organizing these awards, Dino Papale is realizing his dream: the expansion of the port of Giardini Naxos (a seaside resort near Taormina), financed by a consortium of Russian banks and built by Russotti Finance Russfin SpA Milan[32], one of the largest Sicilian construction industries, the is closely associated with Ignazio Salvo[33] and other powerful mafia members[34].

Dino Papale knows all of these people, because along 40 years he was the best friend of Elena Baronoff, an heiress who, after leaving the Soviet Union for Florida, made billions from real estate speculation on the islands off Miami: the luxurious Sunny Isles Beach[35], home to some of the most important plutocrats in the world[36], and thanks to Papale and Baranoff in 2012 a partnership with Taormina[37]. Ms. Baranoff was able to make this investment thanks to her partner and mentor Donald Trump, who knew her because she had always been friends with his daughter Ivanka[38]. When (2015) Ms. Baranoff dies of leukemia, Papale can count on a very close friendship with Trump[39], but also on very secret relationships with Russian power[40], as Ms. Baronoff would have worked secretly for the Moscow government[41].

The Papale family has had a love of Russia for over a century, so that Maria Teresa, Dino’s sister, who follows her father and grandfather, is still the leader of the Sicily-Russia Association[42] and the nostalgic supporters of the MIS Army. Why? Because at the end of the war, after seeing that the United States had allied itself with the mafia, Stalin had decided to support the Sicilian separatist movement, as many Russian exiles still lived on the island[43]. The Papale family also developed friendships and alliances with the Russian mafia clan Solntsevskaya[44]. The clan’s lawyer, Dmitry Jakubowski, is still a welcome guest in Taormina today[45]. One of the clan leaders, Alexander Jakowlew, had a trading office in Milan[46]. One of his managers, Anatoli Borisovich Zhuralev, works with the Papale art galleries and often visits Taormina with Dmitry Jakubowski[47].

Trouble with the Justice 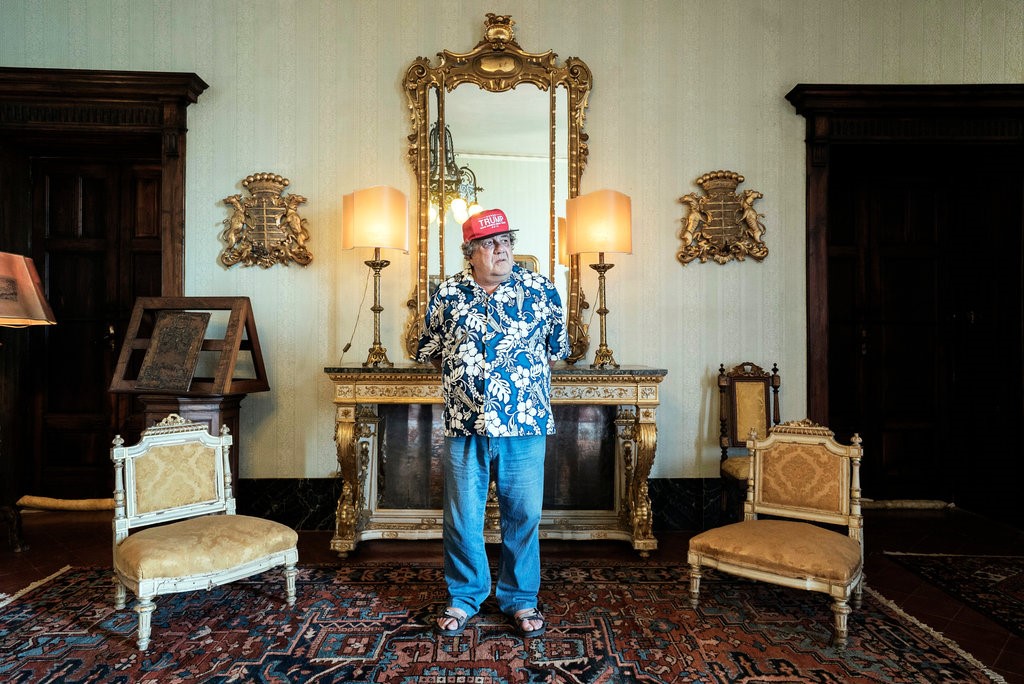 Dino Papale, in sandals, in the splendor of his palace

It is impossible to live in such an exposed position in Sicily and never get into trouble with the judiciary. Dino Papale was sweep away by the politicians’ confessions and was arrested in the summer of 1994[48], but was released shortly afterwards. Since the process never took place, it will come out of this ugly affair flawlessly. He is still not tired of fighting for an international Taormina. Among the things the judges had accused him, there was the cost (and source of funds) of inviting (2006) Seif Al-Islam, favorite son and designated heir to Muammar Gaddafi, into his city. Papale was innocent: Elena Baranoff had paid the money, hoping to convince Seif Al-Islam to marry one of Vladimir Putin’s daughters[49]. Difficult to believe, but true. And in the years that followed, Papale overcame all threats, including those related to the bankruptcy of the “Taormina Arte” festival, in which many of the politicians arrested by the Giorgianni prosecutor were involved, but for which Papale was absolutely innocent[50]. 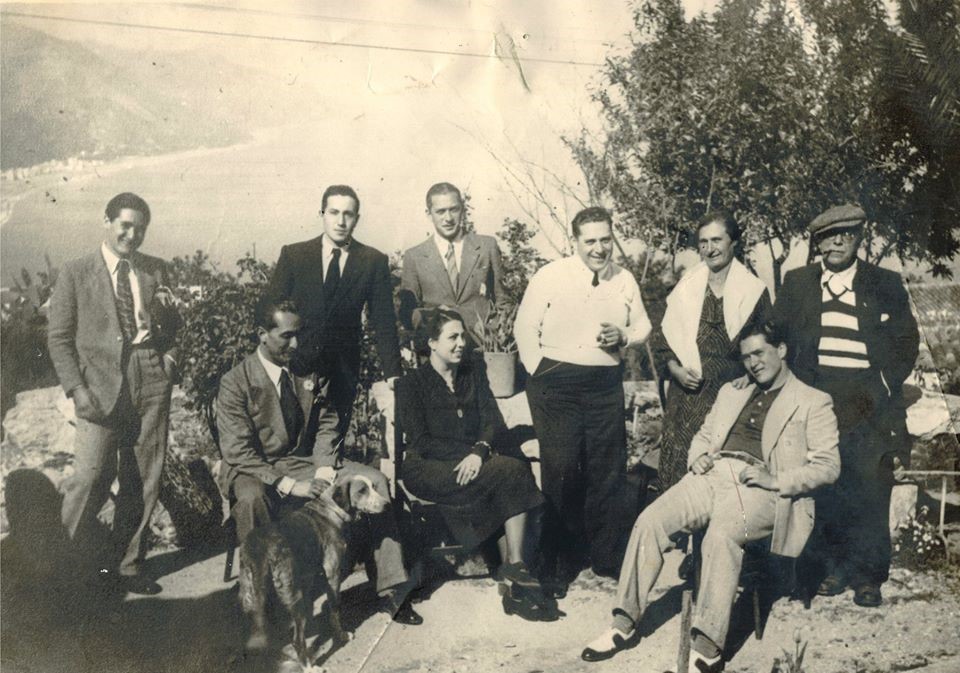 The Papale family at the end of the 30ies

We didn’t write these lines to judge anyone. Despite his humble appearance, Dino Papale is not the King of Taormina by chance. His family really has at least two centuries of fame and modernity behind them – something that we might find it difficult to connect with the deep Sicilian coastal province between Messina and Catania. All of Dino’s ancestors have amazing stories to tell, especially those that smile in photos from almost a century ago, the image of serenity that stems from this secret that has been a fief of the Spanish Kingdom of the two Sicilies, since the times of the French Revolution, since Taormina the restoration carried out immediately after the Congress of Vienna.

Here is the little big secret: there is no need to travel the world. Make sure the world has a reason to come to you. Dino Papale was one of the founding members of the Women Tennis Association when he was walking around on the tennis courts. Another thing you would never believe when looking at him. But it is true, like the whirlwind of Russian baronesses, English exiles, Soviet poets, American real estate gods, Scottish pop singers, Sicilian secessionists, heroes, mafia members and Freemasons who have been whirling around him all his life.

At a time when we are looking for globalization, the reality has never moved a millimeter in the past few centuries. And whatever his past is, it is not scary, and when you hear Dino Papale speak delightfully and tastelessly about himself, his friends, and his family, you cannot hold back a tender smile. On top of that, when Trump came for the G7, he forgot to visit his old Sicilian friend.

[23] Jim Kerr owns one of the most beautiful Hotels of Taormina, Villa Angela (https://www.hotelvillaangela.com/it/), a luxury villa, where he lives with his brother Paul, as well as a local football team, called Celtic Taormina (http://archiviostorico.gazzetta.it/2002/ottobre/15/Kerr_unisce_sue_passioni_ecco_ga_0_0210153557.shtml?refresh_ce-cp), in which he used to play, as he was younger

[35] https://www.bloomberg.com/research/stocks/private/person.asp?personId=240475413&privcapId=240326786 : “Ms. Elena A. Baronoff is the Founder of PrivateCollection&Co., Llc and serves as its Chairman. Ms. Baronoff’s experience serving as a cultural attaché in public diplomacy with the Russian government, combined with her determination was key to her success over the last ten years in marketing and building the brand of high-end luxury condominiums under the Trump brand including Trump Towers, Trump Grande and the Trump International Hotel and Beach Resort. She served as the Chief Executive Officer of Exclusively Baronoff Llc, she licensed and branded the Lalique and Clive Christian brands in real estate for the international market, building on the strategy that was instrumental in elevating the Trump license. In 2008, she was awarded the title of International Ambassador of the City of Sunny Isles Beach for her years of work promoting local commerce and building the city’s profile among the international community. Her knowledge extends far beyond real estate and her entrepreneurial spirit combined with her experience with luxury brands allows her to grow her third venture PrivateCollection&Co. She has a Bachelor’s degree in Mass Communications from Briar Cliff University and received a Master’s degree in Journalism in Russia”.