THE ETERNAL TREASURER OF COSA NOSTRA 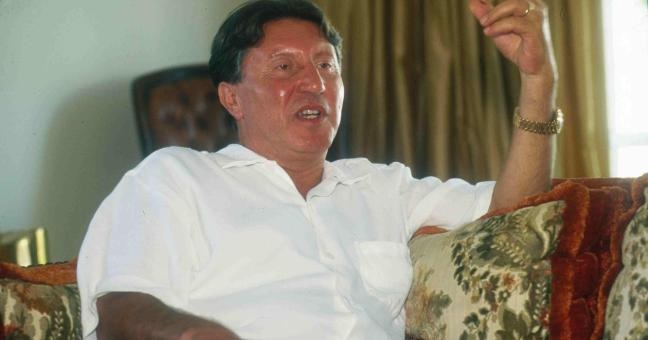 For over a century and a half, the Mafia organisation terrorised Sicily and, from there, the whole of Italy. It has corrupted dozens of politicians, prelates, bankers, magistrates and humiliated good people who were only trying to work. He brought drugs to an island that, also due to its backwardness, was not familiar with this scourge. Despite the extraordinary victory in the Maxi-Process of Palermo, it has continued to grow and prosper: in place of each of the leaders killed in feuds between clans or arrested by the police, others have sprung up, and today this organisation is considered an integral and inescapable part of the Sicilian and Italian economy.

Magistrates such as Giovanni Falcone and Paolo Borsellino, who successfully opposed the mafia, were cruelly and spectacularly murdered. Their system of using repentant mafiosi to gather evidence against their bosses has, over the years, proved to be a double-edged sword, because in exchange for substantial reductions in their sentences and protection from the murderous fury of their former accomplices, mafiosi are ready to say anything – and experience teaches that if I say nine right things and one made-up thing, that one thing undermines the credibility of everything I say.

But the mafia changes, and today it kills extremely rarely, and always people of small rank – internal clean-up operations for its cadres. The great mafia war of the 1970s is a distant memory, as are the years of Totò Riina, the head of the dome, a bloodthirsty and obstinate pastor who probably lived in the wrong century. From Messina Denaro onwards, we are in the fourth generation of Mafia chiefs since the post-war period. Yet there is one man, just one, who has gone through all this history unscathed, and that is Vito Roberto Palazzolo.

A person of great intelligence and business sense, he started out as a money launderer for the Catanese mafia (the losing one), then made his fortune with the Corleone mafia, and survived the maxi-trial, as did Totò Riina, the bloodthirsty boss who died in prison in 2017[1]. Born in Terrasini, on the outskirts of Palermo, on 31 July 1947, Vito grew up in the home of his grandfather Pietro, known as ‘don Pitrinu u Dannatu’, a bandit sentenced to life imprisonment for a dozen murders[2]. Palazzolo’s great skill was that he was the first white-collar man to come from the bottom, who married a rich Russian heiress when he was still smuggling drug money to Lugano, but already had much more ambitious goals in mind[3].

From the very beginning it was his passion for precious stones that led him to study and start a business, with Palazzolo Gioie Srl, importing illegal diamonds from Africa, at a time when no one even knew this trade existed, moving from Sicily Lugano, where he felt safer[4]. These were the times of the Pizza Connection, the criminal investigation commissioned by the American DEA to unmask the schemes for turning smuggled jewellery into clean money. The Sicilian bosses do not trust his unconventional ways, and force him to found a new company, the Pa.Ge.Ko. SA, which converts jewellery arriving from the Third World with Sicilian dirty money, sells it, and makes the proceeds available to the Corleone mafia. Using for the first time banking institutions and finance companies based in New York and Switzerland. 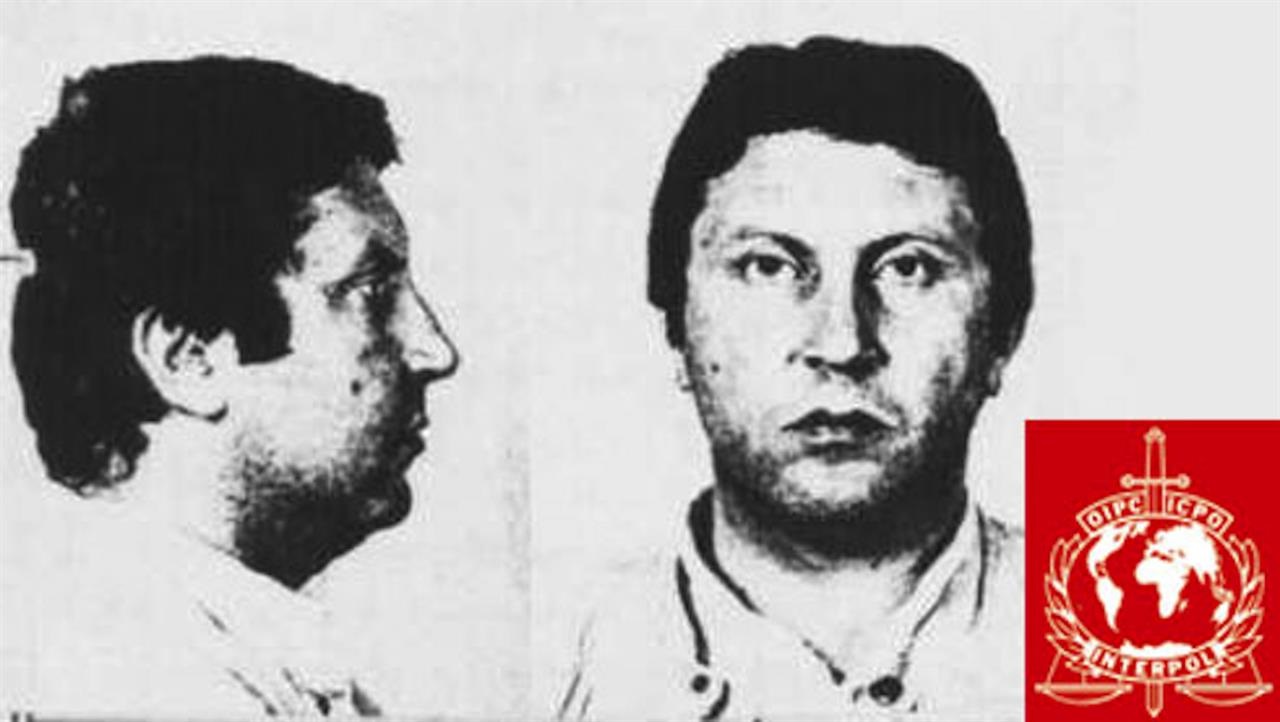 Pa.Ge.Ko., officially, is active in the design, leasing and sale of real estate and industrial complexes. A giant with offices in Switzerland and Germany, and branches in Monte Carlo, Hong-Kong and Singapore. The Pa.Ge.Ko owns the Cristel Biersak Import Export GmbH in Constance, which finances the survival of Sicilian mafiosi forced to move to Germany: among them are brother Pietro Efisio, sister Maria Rosaria, cousin Anna and her husband Achille Fassina. The drug money then travelled from Terrasini to Lugano, via two of Palazzolo’s collaborators, and part of it, once in Switzerland, left for Singapore, where it was reinvested in real estate and business activities in South Africa – Palazzolo’s plan B, should things go wrong. A plan that works, since all those working are loyal, even after decades[6].

The investigation into Pizza Connection shows the investigators that the Mafia has entered the drug trade in a big way: tons of morphine from Turkey are transported to America and sold, after a process, through a network of pizzerias and restaurants run by Sicilian expatriates. The profit is enormous! We are talking about millions of dollars which, thanks to Palazzolo’s contribution, are diverted into the Swiss banking circuit and from there invested elsewhere[7]. Palazzolo invested his share in South Africa: he bought a villa in Cape Town, met important people in politics and business, and made himself well liked. There is war in Sicily, but Palazzolo is loyal to Riina and Provenzano, and hosts in South Africa those who are forced to flee Italy[8].

Giovanni Falcone, in 1984, succeeded in proving his criminal role, and Palazzolo confessed to everything, bringing dozens of picciotti to book[9]. In 1988 came the indictment and the arrest, in Lugano. But then those coincidences of which the history of Ticino’s justice system is full: on 26 December 1986, the prison granted him a 36-hour furlough, which allowed Vito to go to South Africa: the Swiss judges, at the time of his arrest, as they had done for the other great mafia money launderer, Oliviero Tognoli, forgot to seize his false passport. In South Africa, together with his Russian wife, he took the name Robert von Palace Kolbatschenko, and resumed working for the mafia, protected by the ANC and his business friends there[10].

The man from Terrasini is nailed by turncoats. Francesco Di Carlo, once Riina’s most trusted man, claims at the trial to have met Vito Roberto Palazzolo in his office in Berna: ‘It was 1978, Riina sent me there to assist one of his relatives, Antonino Marchese, who was to undergo surgery. Palazzolo gave me fifty million lire, for all expenses’. The money that remained, Di Carlo returned it: “The financier deposited it in an account that he opened for Riina”. The sentence says: “Riina confessed to Di Carlo that Palazzolo was in charge of laundering the profits from cigarette and drug trafficking in Switzerland through various activities, such as trading in precious stones, and other forms of investment. Palazzolo, again according to Riina, was also an associate and partner of Nino Madonia, who, through him, laundered abroad the money deriving from cigarette trafficking made together with the Nuvoletta clan of Marano’. 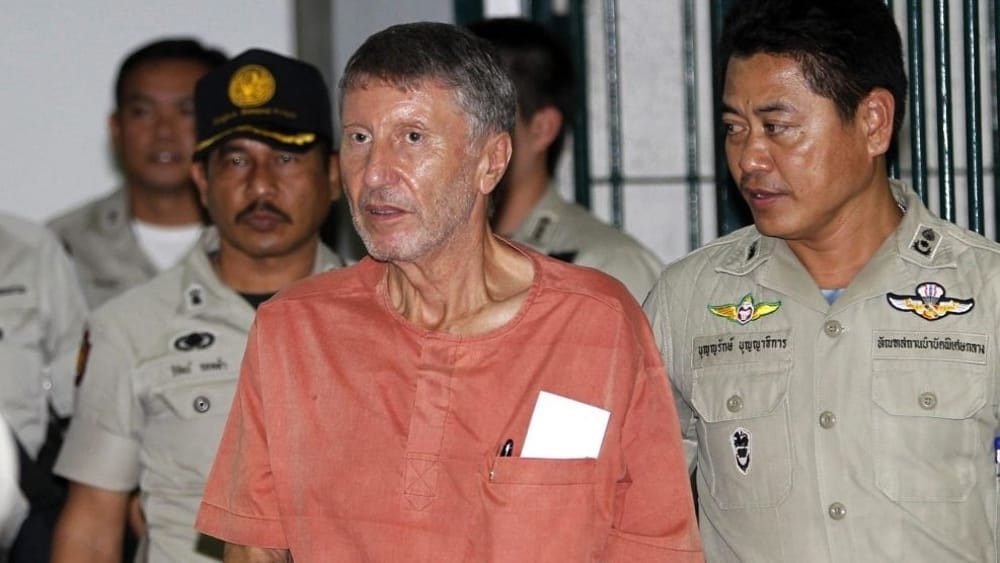 Palazzolo, aged and slimmed down after his arrest in Thailand[11]

Palazzolo then managed huge amounts of capital in the name and on behalf of Gaetano Badalamenti, Totò Riina and Bernardo Provenzano, with whom he bought the water source ‘Eau de vie’, which he obtained the exclusive contract to supply the South African Airways, founded a security company, ran an ostrich farm and a prestigious hunting reserve, frequented by wealthy local personalities; he founded the RCB Corporation Lda, set up for the mining exploitation of precious stones in Angola, then created Von Palace Diamond Cutters to cut them and sell them all over the world – for example to Count Riccardo Agusta, the helicopter magnate, who signs a lucrative consultant contract with him.

He lives on his Franschhoekal estate on the border with Namibia, where he even has an airstrip. Thanks to his friendship with Nelson Mandela and prominent ANC leaders, he hides fugitive bosses such as Mariano Tullio Troia, one of the instigators of the Sicilian assassination Salvo Lima, and Mafiosi Giuseppe Gelardi and Giovanni Bonomo at home[12]. Palazzolo also tries to clear his legal problems in Italy and, in 2003, makes contact with Marcello Dell’Utri, a trusted man of Silvio Berlusconi and later convicted for his mafia connections[13]. The aim is to ‘lighten his trial position’ and ‘soften requests for international assistance’, allowing Palazzolo to visit Italy as a free man[14]. The idea is to convince Berlusconi to influence ‘the outcome of the rogatory with South Africa and the extradition proceedings’ through ‘parliamentary questions, press campaigns and other obscure manoeuvres’[15].

The operation failed, Berlusconi did not want it. Palazzolo continued to travel, taking risks, until, in February 2012, Interpol photographed him in Hong-Kong[16]. The police followed him to Thailand, where he was arrested[17]. After all, he doesn’t even hide, and on his Facebook profile he mentions that he is in Asia on business[18]. Twenty years of absconding came to an end, because in December 2013 Palazzolo was extradited to Italy, where he must serve nine years in prison. The Bangkok judiciary identifies and seizes Palazzolo’s bank accounts and property in Thailand[19].

Vito Roberto Palazzolo decides to cooperate, in order to obtain less oppressive prison conditions, and fills pages and pages of minutes, in which he declares his innocence, and says that the Mafia bosses forced him, with threats, to make his contacts and skills available to organise the laundering of drug proceeds. On only one issue is he reticent: the statements of the turncoat Giovanni Brusca who, speaking at the trial for the Italicus train massacre, claimed that the explosives with which the train in the tunnel was blown up had been made available by Palazzolo’s Thai contacts[20]. 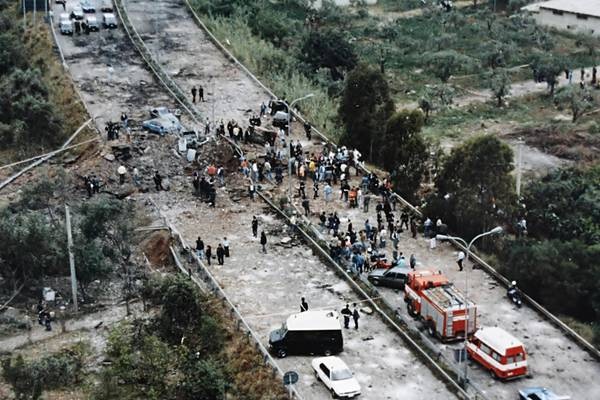 23 May 1992: at the Capaci motorway exit near Palermo, a bomb destroys Giovanni Falcone, his wife and his escort[21]

His professions of innocence find no echo: according to the Palermo Public Prosecutor’s Office, Palazzolo is ‘one of the most important and obscure figures of the Cosa Nostra association’. Inserted ‘for over twenty years in the mafia association dynamics, with relevant functions as a hinge between the international business world and the criminal association, he has had the aim of enabling Cosa Nostra to manage and reuse illegally acquired capital’[22]. According to the magistrates, Palazzolo continues to manage his business from prison, thanks to his South African staff and his son. On another subject he is extremely reticent: the mafia’s links with the Catholic Church[23].

Of the planned nine years, Palazzolo serves five, and in 2019 he is committed to social services – but he disappears. He is thought to be in Thailand, but the new investigations against him have so far yielded no appreciable results. But he can no longer rest easy in South Africa, as the South African judiciary is now also investigating incidents of bribery and drug smuggling and, more recently, the possibility that he is running a diamond racket from Namibia[24].

Among his various businesses is that of mediator for Italian entrepreneurs who want to invest in Angola, and he indicates as possible targets a cement factory, some commercial and fishing ports, fishing and boat-building companies, but also military production for the Luanda army: lookouts, helicopters, speedboats against poaching. As always, he also prospects for diamond, gold and platinum, copper and cobalt deposits[25]. After his escape from parole, this is the new frontier of his business. His son is preparing to take his place and become one of Africa’s biggest industrialists, agricultural and military entrepreneurs and commodities traders. In Italy, by now, no one is looking for him – forty years after leaving his small village on the north-west coast of Sicily, Vito Roberto Palazzolo has arrived where no mafioso had ever gone before. No loyalty to his godfathers, but collaboration between equals. The mafia, by now, is also this.