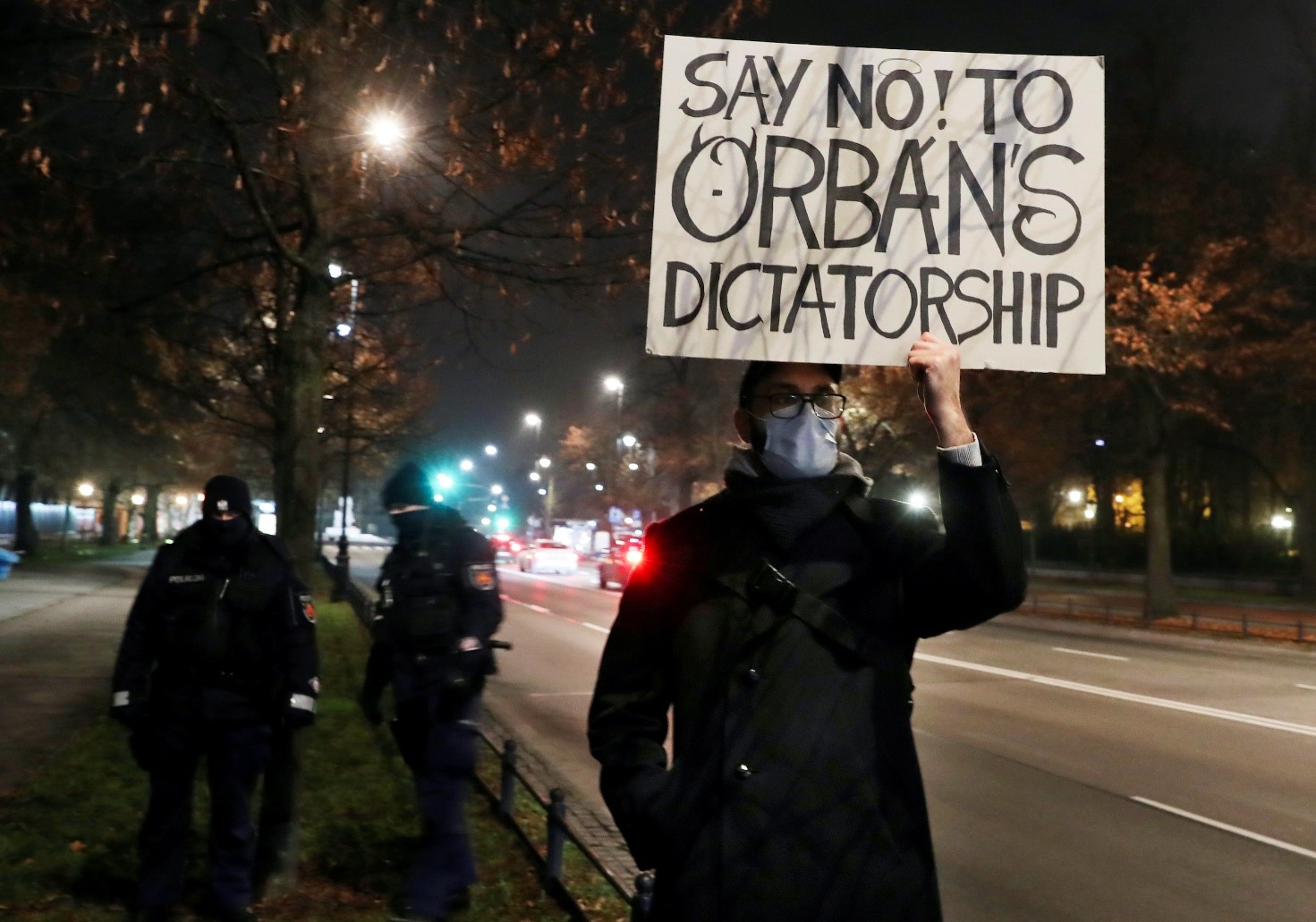 It will happen next Sunday at midnight. On frequency 95.3 FM, after almost a quarter of a century of freedom in Budapest, it will suddenly calm down. The Hungarian court, which accepted the complaint from the media regulator, ordered the revocation of Klubrádió’s license, thus destroying the last critical voice against Viktor Mihály Orbán’s regime[1]. I say this with pain because I myself have been doing radio in Germany for so many years and I am very proud of it. I suffered the assassination of the Hungarian project as a personal defeat: thirty years after the fall of the Berlin Wall, the coldness of Eastern Europe is again unbearable.

One of the reasons for this emotion explains one of the founders of Klubrádió, Oszkár Hegedűs: “If you live in a society where you always have to be careful because you don’t know who is listening and you could be betrayed by someone you considered a friend, the radio is the symbol of liberation. Because it is a dialogue that also protects those who speak and say what they really think. It is something that you do par excellence by passion, not as a profession and it stems from the convergence of the passion of many people who miraculously find themselves around a microphone and an antenna without any planning, economic or journalistic. Free radio, if it is really free, has no precise line, but it is a continuous oxymoron, it grows and flourishes with dialectics and contradictions”[2].

Carsten Rose, one of the founders of the GDR’s only free radio station, Radio FREI Erfurt, has a similar opinion[3]: “When we started we just wanted to have our own voice. We didn’t know radio, but when we discovered it, and it became our voice. An intimate voice that you can hear in the kitchen and the person you are talking to appears to be in the same room. Plus, playing the radio on a free broadcaster forces you to come out of your own shell, learn, compare yourself to others, and fight for your own ideas, and that often requires you to first clarify what you really think”[4]. To erase a free radio means to erase a possible part of us, I add.

The long journey from Oszkár Hegedűs 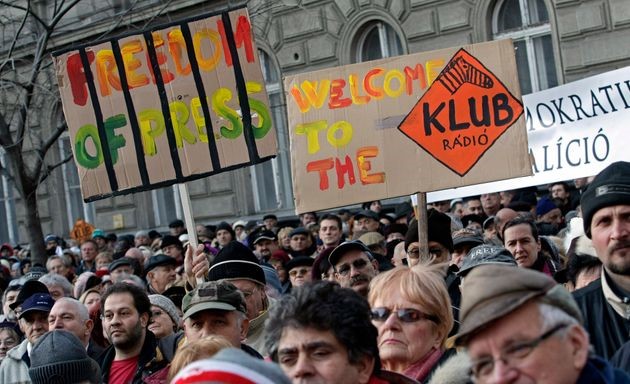 A final silent demonstration of the people and of sadness awaits the court ruling which will forever close the radio station “Free as a Zebra”, which has personified freedom of expression in Hungary for more than twenty years[5]

As Carsten Rose explains, the voice itself is important – that’s why radio is a means, not an goal. The same goes for Klubrádió, born by chance in 1998 when the Austrian public broadcaster ORF abandoned broadcasting in Hungary after ten years due to very poor ratings. The HAC (Hungarian Automobile Club)[6] is applying for a license for the frequency. Strange of course, but this is only a cloak for the public – behind HAC is a group of enthusiasts, led by HAC director Oszkár Hegedűs, a volcano of ideas … someone who, a few hours after the borders opened (1989), left and took the train to Zurich.

Even without a residence permit, he works as a mechanic in Waltenschwil, a village of 2,500 inhabitants in the region of Aargau, 10 km east of the Swiss financial capital. With the money he earned he founded HSM Hungaro-Swiss Management AG[7] and, in nine years, got rich from the auto business, returned to Budapest, made a career, became director of HAC, then founded Klubrádió with his lifelong friends[8].

The radio becomes an unthinkable success because it is the only free voice in Hungary and becomes a training ground where the citizens of the capital meet the politicians of the SZDSZ (Alliance of Democrats and Free). The SZDSZ was the only opposition party at the time, in the last years of the pro-Soviet regime founded by philosopher János Kis[9], the charismatic son of a victim in Auschwitz. A party which, after the end of the Soviet Union, focused on a campaign focused on freedom and the resurrection of intellectuals[10], and won almost 20% of the vote in Hungary’s first free elections[11].

The enthusiasm of Hegedűs and Kis immediately collides with the problem of all free radios: money. Carsten Rose explains: “Until reunited Germany provided funds to support civic unification projects and other funds for free radio, venturing to broadcast radio was a very difficult undertaking. Fortunately, in Germany, and in particular in Thuringia, we have learned over the years to defend our projects and to exert political pressure, so that we have reached a very high level of awareness among the population and the parliament”[12]. Without a license for a frequency, with really amateurish and sloppy resources, you have to do something else to live on and then spend every penny saved to run the radio.

Radio FREI’s people discovered a row of amazing systems during the heroic years of immediate reunification: they received a license to restore an old abandoned mill at a low cost and worked there as farmers[13]. From time to time they would return to Erfurt to broadcast or for initiatives full of happy madness. An example: Erfurt is crossed by the river Gera, which is less than a meter deep behind the town hall. The guys from Radio FREI fix a chair and use it to transport tourists across the river. In cooperation with the union, they offer additional training[14]. A youth center is opened for music and literature[15]. They create a musical group that toured Germany and Switzerland for years and performed the political ballads of the GDR[16].

András Arató and the birth of the Obidos group

In Italy we have had glorious years of developing free radio, and we still have some with us whose memories have survived through the years and generations – Radio Radicale, Radio Popolare, Radio Onda Rossa, Radio Aut, Radio Alice, to name just a few of the most famous. It is difficult for us to imagine what it means to fight for pirate radio at the end of Soviet hegemony. Everyone’s life was in crisis, everything was suddenly called into question: feelings of guilt, disorientation, uncertainty about the future, fear of being belittled by a sarcastic and paternalistic West – these feelings reigned everywhere.

Shortly after reunification, a dear friend of mine decided to leave Berlin, where he worked for a daily before and after the end of the GDR, to write a report on Radio FREI. During the years of the dictatorship, like many journalists, he had come to terms with the regime and had been spied on by friends. That evening, when he got on the train to Erfurt, he had a deep discussion about it with his wife. They told each other what they had not had the courage to say to each other for nearly twenty years and two children. When he returned home four days later with a tape recorder filled with the voices of the people from Radio FREI, he found the house empty. The family couldn’t stand the truth, the woman was gone.

In Klubrádió’s early years in Budapest, the situation was similar: the life of the project is full of controversies, difficulties, hopes and sufferings of a generation of Hungarians who, more than 30 years after the invasion of tanks Russians, have found themselves. masters of their own destiny without knowing what to do with it[17]. Marty Rubin writes: “Everything the candle knows it learned in the dark“[18], and that’s how it happened for Klubrádió.

Once the license was granted for the frequency, HAC decided to get rid of the radio and sold the rights to a new company, Monograf RT Budapest[19], founded and controlled by electrical engineer András István Arató. During the regime, Arató worked as an electrician in the historic town of Kőszeg on the border with Austria. Then, at age 45, in 1990, he opened the first Hungarian political blog and became rich and famous – for example by working as a testimonial for an advertising campaign for Coca-Cola or as a DJ and radio host on the channel’s Hungarian channel of the German RTL Group[20]. 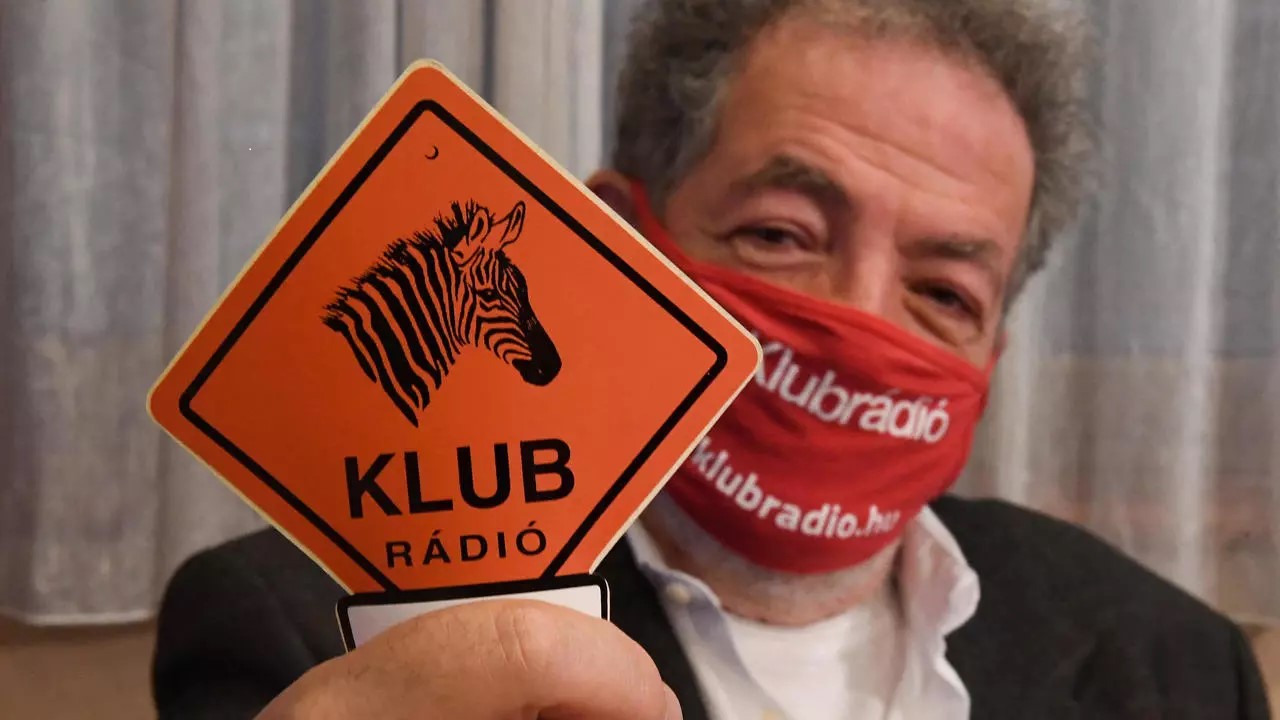 András Arató shows Klubrádió’s stickers, his mask symbolizes not only defense against the pandemic, but also the gag imposed by the regime[21]

Since political power in Hungary has no intention of helping radio, Arató transforms Klubrádió into a commercial radio station that broadcasts nationally while ensuring the independence and freedom of those who take the microphone. One thing Orbán cannot stand and which has been struggling meter by meter for years: tightening tax treatment, revoking the license for national broadcasting, and now revoking the license for the frequency altogether. There was nothing to be done: not even the fact that 25% of the capital of the Obidos group had been sold to a British group, BritMedia[22], did nothing to contain Orbán’s anger. Arató has already announced that Klubrádió will continue to be on the Internet, knowing that the audience will be extremely limited.

Carsten Rose says: “We have to ask ourselves whether radio in the classic sense of the term still exists. I think technology has changed completely and digitization has made traditional broadcasting unnecessary. Everything is digital now. But the meaning, nature, soul of radio is preserved, and this is what you need no matter how and to how much it is transmitted: The future of radio is that of a polymorphous medium and integrated which does not consist only of sounds, but also consists of visual and text content”[23].

In this way, Klubrádió will exist as long as there are people in Hungary who need it. Just like me, who writes these notes and sings out loud the lines of Eugenio Finardi: “If a radio is free, but really free, I love it even more because it frees the mind“[24]. I’m so sorry when I tell this umpteenth sad case as if it concerns me personally because I live it as an existential matter – as an emotional fact. To paraphrase the greatest Italian poet, Giorgio Gaber, and to put the Hungarian broadcaster (and Peppino Impastatos Radio Aut) on the pedestal of a love story: it’s freedom, Maria; it’s the revolution, Maria; it’s Vietnam and Cambodia, Maria: the reality.