THE GIANT OF THE MILITARY HACKERS BUYS OUT AVIRA

You may have heard this name: AVIRA. If you’ve heard it, you’re one of the over 500 million people who have installed this free system on their computer today, particularly in Western Europe, which, according to the company, protects and cleans their customers’ devices from 30 million viruses, footprints and Trojans per month[1].

The fact that this cyber defense system is free and is often already installed when you buy your computer is probably the key to success. After that, Avira finances itself with a number of more specialized products[2], even if there are no precise data on sales: According to the specialist magazine Owler, it is around 100 million euros[3], according to the magazine Digitalwelt around 70 million euros[4] – much less than some of the competitors in the global market, but that’s right that Avira prefers to have a large number of customers for free instead of just selling expensive products.

But those who don’t grow are lost in the global economy. As a result, in April 2020, Tjark Auerbach, the founder of Avira, which includes a dozen companies in Germany and at least as many worldwide, sold a share of almost 100% to Manama’s Bahrain Investcorp group for $ 180 million[5]. For Investcorp, this is not the first takeover in the cyber security sector, but it is certainly the most important[6]. It is a multinational financial group whose ownership structure is extremely non-transparent, which is hidden by several offshore companies, almost all of which are based in the Cayman Islands, and whose turnover is also difficult to calculate. It is said to be around $ 31 billion[7], but the sum of sales across the group’s various intervention sectors appears to be much larger.

The Sheiks behind Investcorp 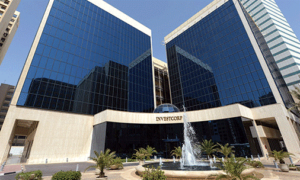 The Manama’s skyscrapers, HQ of Investcorp

If you look at the list of Investcorp Directors, it’s easy to identify the representatives of many of the most powerful families in the Middle East, from Saudi Arabia to Bahrain, from Oman to Qatar, from Kuwait to the United Arab Emirates. You might think that this is a mere financial instrument in which the Bahraini leading families have persuaded the main clans of the Persian Gulf to participate in impressive diversification within economies that have been dominated by oil and construction for decades[8]. But it is an incomplete picture. Investcorp is a fundamental means of increasing and strengthening the political and military influence of some Middle Eastern countries on a global level.

Since March 2017, the main shareholder of Investcorp, with a 20% share of common and preferred shares, is the Mubadala Group, based in Abu Dhabi[9]. This group was born in 2002 under the name Mubadala Development Company and has gradually developed into one of the most important industries in the entire Persian Gulf[10]. The number 2 of the government of the United Arab Emirates, Mohammed biz Zayed Al-Nahyan, who has been the strong man of the UAE regime for years due to the serious health problems of the head of State (his older brother[11]), is the leader of this group[12]. Sheikh bin Zayed decided about a decade ago to bring his country’s military, high-tech, chemical and aviation industries together under the Mubadala umbrella[13].

The main reason is extremely political. After the popular uprisings known as the Arab Spring, the Gulf monarchies feared that what had happened in Egypt – that is, a riot on the streets that forced the government to fall and lead to democratic elections won by the Islamic Brotherhood (of which these monarchies are most afraid due to the political and religious ideology of this organization) could happen in their countries too.

Mohammed bin Zayed al-Nahyan created step by step a multi-billion-dollar giant of military technology and cyber security[14]. But also a means of political action[15], since one of the group companies (which today changed its name to EDGE Group) has invested a billion euros in the French state investment fund LAC1, which owns the national debt of this country[16]. It is therefore conceivable how much the opinion of Mohammed bin Zayed al-Nahyan, leader of the EDGE group, influences the management of everyday life in France. 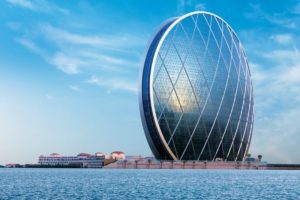 Some examples of what DarkMatter does. One: Hisham Almiraat, a Moroccan dissident, fled to Rouen, from where he led a network of criticists of the Rabat regime. DarkMatter infects all computers that receive messages from Almiraat and provides lists of the names of those still living and being arrested in Morocco[21]. Two: On October 2, 2018, Saudi journalist Jamal Khashoggi was kidnapped, tortured and killed in the Saudi Embassy of Istanbul[22]. When he entered this Embassy, a team of torturers were waiting for him, because DarkMatter followed him step by step[23]. Three: Ahmed Mansoor is a critical activist against the Abu Dhabi regime. DarkMatter makes a copy of everything: email, phone calls, home and street conversations, photos of people meeting with him[24]. He and his wife Nadia are arrested and tortured[25], and he has been sentenced to ten years of prison[26]. Four: Since 2016, DarkMatter’s Karma software controls everything around the Emir of Qatar, Tamin bin Hamad Al-Thani, his family and the most important companies in Doha[27]. At the same time, the EDGE Group founded another company, CAGN Global, that works with mercenary soldiers (a private unit of Mohammed bin Zayed Al-Nahyan, called R2[28]) whose job is to organize attacks, kidnappings and assassinations abroad[29]. Five: With the support of a team of Italian hackers, the Egyptian secret police persecuted, kidnapped and tortured several people suspected of criticizing the regime, including Italian student Giulio Regeni, who has been killed in Cairo between January and February 2016[30].

According to European and American security experts, EDGE Group, Mubadala, DarkMatter and CAGN Global have prepared more than 350 arrests of opponents[31] – people tortured in Abu Dhabi prisons, including influent personalities of the United Arab Emirates and members of the Saudi Arabian royal family. Now DarkMatter is planned to attack Qatar during the World Cup[32] and, if possible, the murder of the Emir of Qatar[33]…

Is it acceptable for a German company, in such a delicate industrial sector, to fall into the hands of an investment fund, the majority of which is in the hands of this kind of gentlemen? What consequences can this political and military industry have for Avira’s 500 million customers?

That is not everything. Mohammed bin Zayed Al-Nahyan founded an association that brings together the best brains in the Emirates, and elaborates political, diplomatic and military advice[34], and has a number of advisors that will make you shudder: dozens of powerful people from around the world, including the former British Prime Minister Tony Blair and the German Chancellor Angela Merkel[35]. This facility is called ECSSR (Emirates Center for Strategic Studies & Research) and is closely linked to Tawazun, Mubadala and the other military companies of the EDGE group. So tight that in August 2017, the ECSSR bank account was used to pay a bribe of $ 20 million for a weapons offer in the Emirates that was disguised as a contribution to environmental research[36]. Is it acceptable that Ms. Merkel and Mr. Blair are on the official list of lecturers at this association?