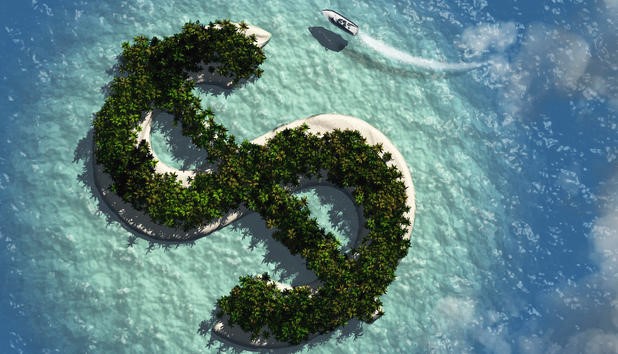 The history of tax havens begins in the second half of the 19th century with the decision of the Principality of Monaco to allow a casino – an activity prohibited in France. From this decision a whole banking and financial system was born, able to offer illegal services elsewhere, but in French francs – a strong currency accepted worldwide. Then came the great German banking crisis, and with it the rush to hide the private wealth of the richest families in foreign banks, with the international trade in effects (i.e. stock market securities), transported in suitcases similar to those of smugglers who, in many European areas with major duties on goods, carry food on the backs of donkeys through dangerous and long marches over mountains or seas.

At the outbreak of the First World War, ten or so Frankish Ports sprang up: they were created because of the difficulties of supplying raw materials to the belligerents, and the need to keep buyers secret (to avoid running into naval blockades, such as the British one which prevented Germany from buying Chilean saltpetre, which was the basis for the manufacture of German industry’s bullets. Switzerland became the hub of most secret transactions – so secret that even transactions between warring states were possible, as historical reconstructions in the last years of the 20th century describe the existence of British mechanical parts in German weapons.

After the war came the Great Recession, and with it the need for large companies and capitalist families to avoid, as far as possible, the payment of customs duties and property taxes. A German economist, Robert Liefmann, between 1924 and 1938 described this new nascent world, and taught the first multinationals, but also small peasant countries, such as Liechtenstein and Luxembourg, that by introducing laws guaranteeing secrecy they could achieve even better results than Swiss banks.

During the Second World War, the relationship between belligerent states and tax havens was reversed: it was now small jurisdictions with special laws that presented themselves to political and military leaders and offered their services. The United Kingdom does this in grand style: it can count on the six offshore zones of the Isle of Man, Jersey, Gibraltar, Guernsey, Hong Kong, and the Virgin Islands. After the end of the war, the business of tax evasion became a system practically accepted by the whole world, since all the most industrialised nations have control of at least one offshore jurisdiction. But tax havens now also serve the trafficking of arms, drugs, slaves, whatever is officially forbidden in large nations – but used by the same nations for diplomatic or colonial wars.

At the end of the 20th century, with the explosion of military terrorist groups, the international community changed its attitude. Today, rather than curbing evasion and illegal trade, it is important to control the flow. National laws change, and tax havens become largely obsolete: there are too many of them, they are insecure, they are extremely expensive, and they are still broken by police investigations. In the last twenty years, the system of Tax Havens has changed profoundly. The time has come to explain how – and to observe how the few places that still work have managed to survive the end of the Cold War and the beginning of the new religious wars.