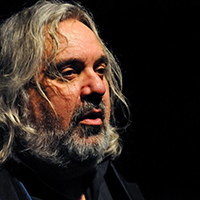 Today, the comprehension of reality is illusory. To a certain extent this has always been the case. The difference now however is that the chimera is finally apparent to the masses. The doctrine of ‘knowing that you know nothing’ is no longer unique to Socratic disciples. Besides, the great contemporary disillusionment of ‘knowing that you cannot change anything’ chimes the death knell of equality, emancipation and participatory democracy. Just two hundred years after the cataclysmic French Revolution, almost all of its innovations have been negated and undermined.

Attempting to assess the credibility of information in the public domain is often pointless, even in key areas such as science, politics, economics, military technology and power relations. As is trying to improve the situation through voting. While it is obvious that complexity has always existed, today complexity is weaponized in order to undermine confidence and cohesion, demonstrating that some of the objectives of democratic social organization have failed.

For centuries the Ten Commandments as dictated to Moses, when taken separately from the religious dogma enshrouding them, served as the foundation of morality in the West, and not only for Christians. Today this foundational morality is under question. Individualism runs rampant, far outreaching the bounds of its own socializing limitation: that one’s freedom should end where its exercise reduces another’s freedom or causes them harm. Maybe you can lie, dishonor your parents, steal and kill, all in the name of personal liberty? Once abhorrent qualities are now not only accepted but celebrated: laziness; envy; anger; avarice; arrogance, equating to smug ignorance; violence stemming from fear and ignorance; and lust, using sexuality as an instrument of power. Prudence, fairness, doubt, honesty, civic duty and a sense of justice are taught and experienced as weaknesses. Suddenly every single childish act or selfish whim is acceptable. What is more, the Christian Church, drenched in the cynical hypocrisy of many of its leaders, is one of the main drivers of this profound and apparently irreparable change.

We are entering an era reminiscent of the late 1920s as more and more of the global population are choosing bureaucratic, cynical and sadistic dictatorships over complex democracies, just as some chose an annihilating Holocaust once before. People are not being offered solutions to their problems, and no longer believe that centrist political movements have the will or capacity make meaningful changes. Citizens feel impotent. Their voices have been completely silenced by the imposition of political, economic and military power, especially in the last twenty years. We have lost the ability to truly express our own opinions. We have become slaves to a powerful machine that becomes more efficient, invasive and deadly every day. To dare to protest does not make sense. Acts of defiance, even tragic instances of self-immolation, have their meaning twisted by media propaganda. They are represented as perverse, dangerous and ignoble.

This is not to say that all of humankind is consumed by selfishness, immaturity, ignorance or destructive behavior. Italian intellectual Enrico Cisnetto even suggests that the vast majority of Europeans live by the same values as they did seventy years ago.[1] The trouble is that now those people lack political representation, and the media ignores them. There is no political party that represents them, and their culture is excluded from the mainstream narrative. What is more, we now live in a dictatorship run by imbeciles and their feudal lords.

This outcome was predicted by intellectuals up to sixty years ago. The Italian poet Giorgio Gaber called democracy ‘a superstition’.[2] In 1974, when commenting on the development of American society Gaber said, ‘freedom seems within everyone’s reach, like the guitar. Everyone sounds the way they want, but everyone sounds the way freedom demands’.[3] That is exactly what happened. Today, anyone claiming their democratic right gets no response. Protesters often do not know, or communicate, the specific changes they are fighting for. As a result, their anger only serves to spread fear in the general population. On the one hand selfish individualism is advocated as the founding value of today’s civilization, and yet paradoxically geopolitics dictates the annihilation of real individual freedom. Geopolitics leads to an implication that, ‘Germany does X’, ‘Turkey thinks Y’ or ‘China says Z’, as if a nation’s diverse populations could be grouped together into a neat homogenous unit. This fallacy is made obvious by fact that it is obviously impossible to find a nation of people who all think the same way about any given topic.

In a 2013 in an essay titled ‘The Future of Intelligence in the 21st Century’, founder and editor of veteran and highly reputed espionage magazine Eye Spy observed that the military and industrial espionage techniques of the past are no longer useful for understanding reality or revealing secrets. These tried and tested practices only remain useful for identifying targets to hit blindly, without any forethought about possible consequences. Today, Birdsall writes, information is everywhere: it is no longer hidden. However, there is such a profusion of accessible information available that it is almost impossible to understand and analyze. So Birdsall concludes that of the ten possible espionage specializations, only one really helps us to understand the world as it is now: the analysis of publicly available knowledge, what he calls ‘open-source intelligence’.[4]

Well, open-source intelligence is what we do. We analyze publicly accessible information and offer it up to anyone who has the patience to read it, especially for those at the beginning of their own information journeys. We do it for people who, miraculously, still retain the great constitutive virtues of a true human being: curiosity; empathy; solidarity; justice; and freedom, the most dangerous virtue of all.

[4] Mark Birdsall, “The future of Intelligence in the 21st Century”, The Emirates Center for Strategic Studies & Research, Abu Dhabi 2013, page 3. Available at https://www.ecssr.ae/wp-content/themes/ecssr-child/split/100-The-Future-of-Intelligence-in-the-21st-Century_Preview.pdf