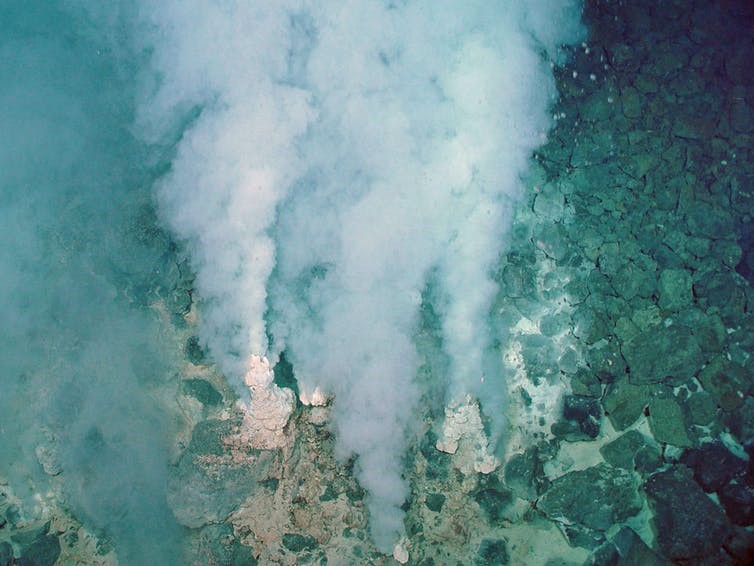 EDITORIAL: THE CHEEKY DESIRE TO DESTROY THE OCEAN

On March 4, 2021, under the direction of Daniela Camboni, the financial analysis site Stansberry Research, which has been one of the pillars of the world view of the mineral resources market for more than twenty years, broadcasts a fundamental interview[1]. Star of global financial journalism, Camboni ran KitCo News – a television and web channel exclusively for the mineral market – for 12 years. In that leap of time, both Camboni and KitCo have grown to the head of a multi-million dollar empire. The then unknown and ambitious journalist has become one of the most famous faces and voices on the global web.

Daniela Camboni interviews Gerard Barron, CEO of a Canadian company called The Metals Company, and billionaire Frank Giustra, who is both a mining expert and a philanthropist. The subject of the interview is the introduction to the birth of a new multinational, The Metals Company, resulting from the merger of SOAC Sustainable Opportunities Acquisition Corporation Vancouver and DeepGreen Metals Inc. Vancouver. The company is digging the bottom of the Pacific Ocean to collect minerals that are expected to become increasingly scarce on the earth’s surface: cobalt, nickel, copper and manganese[2].

The program supports the following view: By digging into the ocean floor, humanity can dispose of hitherto unimaginable amounts of materials that are necessary for the development of environmentally sustainable technologies. However – twenty years along, NGOs around the world have been arguing the opposite: digging the ocean floor destroys an entire ecosystem about which we know little or nothing, endanger the geological and tectonic stability of the continents, pollute and heat the ocean in an irreparable and wise manner, and could become the proverbial straw that pulls the camel’s back from its environmental balance.

For this reason, for more than a quarter of a century, the project of exploiting the seabed continued almost in secrecy and thanks to the use of an agency founded by the United Nations, the International Seabed Authority. ISA sailors from Kingston (Jamaica), which has won more defeats than victories and has nonetheless been authorized to issue mining licenses to international consortia.

So far, the ISA has tried to make it appear that this is an operation in which more than a hundred nations of the world are amicably involved and that they give developing countries a great opportunity to get rich. But the countries that dug first (Papua New Guinea, Tonga, Nauru and Kiribati) have now withdrawn, showing their fear and are now desperately (and unsuccessfully) trying to stop the bulldozers.

Too late. The merger between SOAC and DeepGreen Metals officially renders what we have been trying to prove for years, with intensive research in the labyrinth of pyramid structures of opaque financial companies in tax havens: there is only one project that brings everyone together – Russian oligarchs, American and Canadian billionaires, adventurers from all backgrounds, UN officials who see themselves as Gods, blind or corrupt politicians. The project is becoming a reality and is expected to start digging in the middle of the Pacific Ocean during this new decade[3]. For years the project has been hidden behind the facade of dozens of acronyms, almost all unknown, but now it has been decided that there is no longer any need to be careful: Frank Giustra, for example, had so far vigorously defended the secrecy of his participation.

There is not much we can do, but we have to do it: we have to show as many people as possible what has happened and, seriously, what could happen. Show how many crazy projects were born from the dream of excavating the Pacific Ocean and now aim to excavate the Mediterranean or the Caribbean Sea, a few kilometers from the coast. Projects that are not only in the hands of mining companies, but also companies that exploit gold, oil or the military industry. Because the seabed exploitation project hides even worse nightmares. And we’re just trying to wake everybody up now, as it might be too late.